A TALE OF TWO PIANOS

But I’m not Dickens, never wanted to be. Too many words in his novels. But the comparison seems appropriate after my trip recently, with my beautiful Z, to Montgomery and Muscle Shoals, Alabama.

We began with a day in Paducah, Kentucky, at the National Quilting Museum. Yes, friends, I accompanied Z to look at rooms full of unique and dazzling quilts and now find myself a fan of this incredible art form. I’ll save that for another blog.

Back to Montgomery. We stopped for a tour one morning at the Dexter Avenue King Memorial Baptist Church, aka The Martin Luther King Church. This is where King served as pastor from 1954 to 1960, and where the bus boycott began in 1955, after Rosa Parks refused to surrender her seat on a bus to a white man. The church, built in 1885, sits just two blocks west of the Alabama State Capitol, where another kind of history was made while we were there. Keyword: Abortion. A new low, in my opinion, of American politicians turning their backs on We the People. Surprisingly, there were no demonstrations, marchers, protesters. Those would come later. King would have been mortified by the immediate silence. 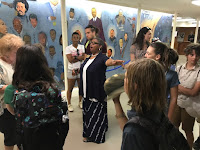 By now you’ve got to be wondering, Where do the pianos come in? Right here, in the church. Z and I joined a small tour in the church - a group of middle-school students, plus a dozen older folks. Wanda, the inspirational tour leader, told us about the church and civil rights history, got us up and singing and standing in front where King stood. It was more than a tour. It was a celebration, a revival meeting, an emotional connection to events that occurred on this spot sixty years ago. Behind us were a variety of musical instruments: a Hammond B3 organ, a guitar, a set of drums, some risers for a chorus…and a grand piano. 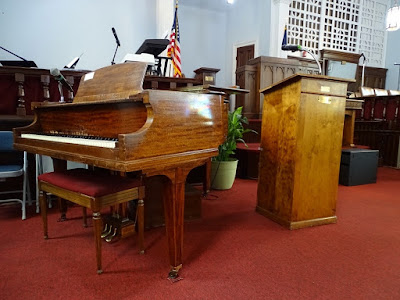 Wanda talked about music as part of the Kings’ history. Dr. King in Boston, a young man with a future as a great leader; a talented young woman, Coretta Scott, majoring in voice and violin at the New England Conservatory of Music. They met, married, and were together until the day King was killed in Memphis. Coretta lived until 2006. Wanda spoke of the power of music, how it brought them together. Then she asked, “Does anyone play an instrument.” A student said, “Violin.” “Wonderful,” said our guide. “Anybody else?” I hesitated. Z threw me a look that said “Go ahead,” so reluctantly I said “Piano.” “Come on up here,” said Wanda. “Play something for us.” I froze. King’s piano? Me? My surprised response was “Really?” “Really,” she said. “As long as it’s not Chopsticks.”

I walked over to the piano, slid the bench out, sat down, took a deep breath, while my mind was going through dozens of chords and approaches and tempos and I wanted something between gospel and blues and finally decided where to start. I put my hands on the keys. I’m sure it was my imagination, or maybe just sounds good now, several days later, but I felt a surge of something come up through my hands. I know. It sounds so new age or transcendental or whatever the latest spiritual discipline is. But I knew this was no ordinary piano. I played. I don’t know how long, not more than a couple minutes. Ended with a flourish, got up from the piano bench to applause, tipped my hat, got a high-five from an African-American woman, and returned to my seat. I don’t remember much after that. 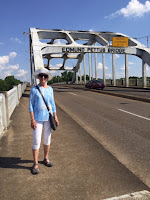 The following day we left Montgomery and made a brief but significant stop in Selma. Z’s mother had marched across that famous bridge 54 years ago and she wanted to retrace her mother’s steps. A touching tribute.

Continuing north, we jumped onto Alabama Highway 22, headed to Muscle Shoals. This is the home of two famous recording studios, where some of the most famous and influential names in music held sessions starting in the 1950’s. To name a few: Aretha Franklin, Rolling Stones, Willie Nelson, Joe Cocker, Paul Simon, Otis Redding. You get the idea. Many of the artists were drawn by a group of four back-up, studio musicians known as The Swampers.

The town of Muscle Shoals is nothing to write home about. It looks like an endless stretch of franchise businesses, fast food joints, big box stores, hundreds of small and large retail outlets (or so it seemed) and acres of parking. The next morning we found the two studios we wanted to visit. 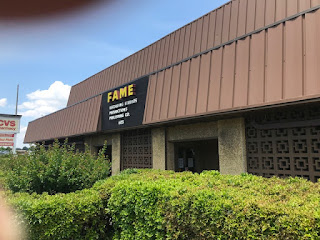 The first was FAME studios. We made a brief stop there, but no tour was scheduled. They were very protective of the artists recording there, wanted to avoid social media bringing in large crowds to gawk and cheer. 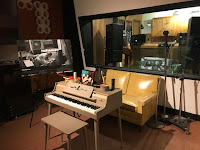 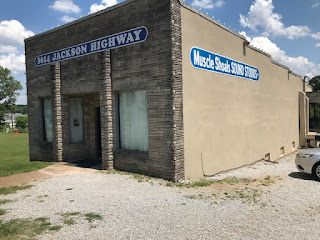 We then drove to nearby Muscle Shoals Sound Studio. A tour had begun and we joined it in the main studio. By night it’s a working studio. Our guide, a laid-back southern gentleman with an easy drawl and impressive knowledge of the studio instruments and musicians, related stories about past sessions with the legends. Various instruments lay scattered about the space.
We stood in front of a 1972 Yamaha grand piano. 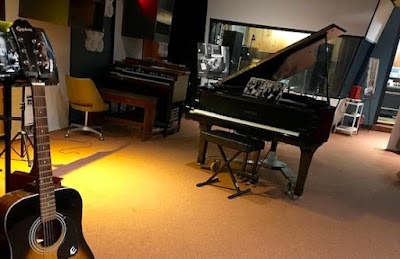 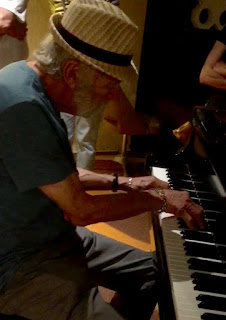 And that’s how I ended up sitting at the Muscle Shoals piano that had been touched by everyone from Aretha to Mick. I played something between a heavy blues and a back-beat boogie. Z captured my performance on video. A treasure. Instead of a high five, a woman exclaimed, “That gave me chills.” Me too, I thought.

I look back on those two pianos now and think, “Carnegie Hall couldn’t be any bigger kick than this.” My fingers tingle at the memory.

(For a documentary about the studios, check out “Muscle Shoals” by filmmaker Greg Camalier. You’ll see lots of familiar faces that are part of America’s musical legacy.)  "Muscle Shoals" documentary