Her Mother was a Pilot in WWII

This story begins about a month ago, in April of 2019, when I spent a day at the National World War II Museum in New Orleans. One of their exhibits featured stories and photos about the role women played during the war. Six million of them joined the workforce. Some of them became pilots. I found myself fascinated by the history of women pilots, how many women flew warplanes, the valuable service they provided, and the initial resistance they faced.

I mentioned this to a good friend, Bev Berner, one evening. Her reaction surprised me. “My mom was a WASP,” she said.  “She flew planes in World War Two.” Bev’s enthusiasm was contagious, and I told her I’d like to write about it.

So that’s what this story is about. Bev’s mom, Esther Dee Poole Berner. She was born in 1908 in Gadsden, Alabama, ran away from home when she was fifteen, got married, had a son, got divorced. Along the way she had various jobs, including a ballet instructor, sales girl in a variety store and - this is where fate steps in - a job at an airport in Houston. She went on her first flight there, in March of 1942, when the war was just four months old. Something clicked inside of her. She knew what she wanted to be. A pilot.

The U.S. was at war with Germany and Japan, and we were losing. Men and materials were desperately needed. Women were becoming recognized as a valuable source of labor. You’re probably familiar with Rosie, The Riveter, thanks to the Norman Rockwell painting. Becoming a pilot for a woman, however, was scoffed at by most of the men in the military, starting at the top with General “Hap” Arnold. Women were already flying warplanes in Britain, from factories to bases, as that nation struggled to survive. America eventually caught on and formed the Women Airforce Service Pilots (WASP) in August, 1943.

Bev’s mom joined the WASPs. Against imposing odds. Esther had only half the number of hours of flight time necessary, but she convinced Jackie Cochran, the founder of WASP, to accept her. When Bev talks about her mom, it’s with great pride, admiration and love. Consider these odds a woman faced then: over 25,000 women applied to the program…1,830 were accepted…only 1,074 completed training. That’s a success rate of 4%. And Esther was one of them. 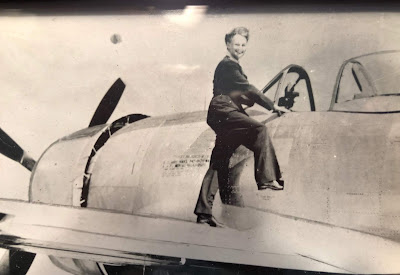 Bev has her mom’s log books and flying records. They show that Esther joined the WASPs in July, 1943. Her job was to fly the planes - fighters, trainers, bombers, including the B-17’s - from the factories where they were built to the military bases on either coast. From there, the planes would be transported to England or the Pacific islands. 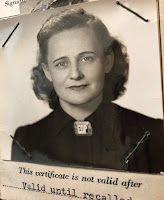 As the end of the war approached,  the WASP program was disbanded in late 1944. Esther loved the WASPs but her job was over. That’s not the end of the story, however. She wasn’t finished with flying. Esther returned to Houston and found a job as a private pilot for a Texas radio station executive.

Late in 1945, Esther married Don Berner and moved to Indianapolis. “I entered the picture in 1948,” says Bev. “My parents had an airplane. All their friends had airplanes. I thought everyone had an  airplane.” Then things changed. Life became difficult for them when Bev was nine. Her dad left them. Esther and Bev moved to smaller quarters, without a kitchen. “We were cooking out of an electric frying pan and doing the dishes in the bathtub,” said Bev. But Esther wasn’t finished with flying. Through hard work and determination, Esther became the Director of the Indiana Aeronautics Commission and in 1975, the Aviation Association of Indiana named her "Man of the Year." Outstanding achievements, satisfaction, a sense of worth, and a good mother to Bev - in other words, a life well lived.
Read her obit to see just how far she came. 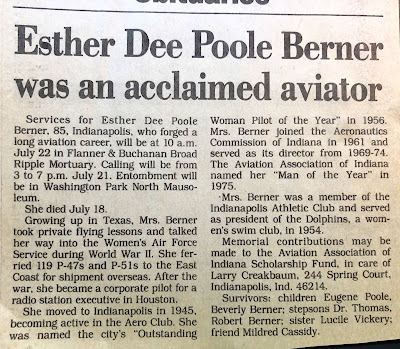 So what’s this story about? It’s about a woman who was determined to succeed in something she loved. It’s about the dismissive attitude towards women by men. It’s about a daughter who inherited her mother’s optimism, determination and passion for life. It’s about my friend who wanted to share her mother’s incredible story.
Posted by Gerry Mandel at 7:55 AM