A Poem About My Dad, Cherokee Street, the Great Fire

I took a poetry class at LLI a couple months ago (winter/2020) with Polly Willard. I didn't know much about poetry and wanted to try it. Some excellent writers were in the class...all of them men, if you can believe that. One of our assignments was to write a "sequential poem," which - as I learned - is a long poem made up of several shorter lyrical poems. Here is my poem, which I want to share with you.

THE RED GOOSE
by Gerry Mandel

I stand on the cracked and littered sidewalk,
stare through the grimy plate glass window into a grim and vacant space.
This was my father’s shoe store for more than forty years,
as essential to him as food and air.
The store and street once resonated
with shoppers and a transcendent energy,
accompanied by a soundtrack of voices and traffic.
This was Cherokee Street, a portrait of coexistence.

Now the store holds only ghosts and memories.
Over the entrance hangs a proud Red Goose Shoes sign.
Suspended in immutable splendor,
a happy reminder of the line of children’s shoes
he sold and the golden eggs he gave to kids.
My father evolved from a four-year-old immigrant from Russia
into a respected and well-liked businessman who made friends
with aldermen and mayors, prize fighters and comedians,
rabbis and priests, maitre-d’s and cops.
He loved me.  But it was unspoken. He frequently brought home shoes for me,
his way of saying “I love you.”  Shoes were his language.

I often wonder why we have such difficulty getting in touch with our fathers.
How and where the distance began.
He was born on the other side of the world, entered a strange land,
made his way to St. Louis, learned the language, the hustle, the do’s and don’t’s of making it in America, ran his own business, survived The Depression, watched his store burn to the ground in 1940,
along with the Casa Loma Ballroom.
At one of our lunches, instead of telling him I got a raise or was thinking about buying a new Monte Carlo, I wish I had told him
What an incredibly beautiful job he had done with his life and mine.

I touch the cold window.
My Dad slides a shoe box from a shelf, flips open the lid, takes out a size five beige pump and presents it to a plump, seated woman who has one shoe off.  He looks up at the window, sees me, smiles.
Then he slips the shoe onto the woman’s foot.

The firehouse, usually comfortable in winter,
couldn’t keep out this January night.
“Colder than a well-digger’s ass”, said one of the guys.
Never one to mince words. We all grumbled.
“Hope we don’t get no alarms tonight,” I said. “It’d be a hard ride.”
Thinking if we got a call, not much good we could do.
Even hose streams turn into ice towers in this. Lousy way to start off
the new decade. The 40’s. Another term with Roosevelt. Gimme a break.

About nine, the alarm went off.
We looked at each other, all with the same thought:
Shit, we gotta go.
A dark, freezing ride down Jefferson, right turn on Cherokee.
And there it was, lighting up the night sky like a sunrise.
Huge fire at Iowa Street. Casa Loma Ballroom. Walgreen’s. JC Penney.
And the shoe store, owned by that Jew. Hell, the street was lined with ‘em.
Gonna be a lot of burnt leather tonight, I thought.
Unless I save me some size 12 D.
Musta been another half dozen engines there, guys chopping ice and hauling hoses, and yelling “over there” and “look out” and “that’s a fire wall. Let it be.”
I jumped from the wagon before it even stopped
and that’s when I saw him.
The little Jew. Hands deep in his overcoat. Stooped against the cold.
No hat on his bald head. A terrified face lit by the inferno.
His store, his life, consumed by the unyielding appetite of yellow and
orange flames.
Black smoke fading into the night sky. Long strands of ice
useless in this weather.

He caught my eye as I ran past and I saw a helpless middle-aged man who probably got off the boat as a kid. Welcome to America.
I never did care for that kind.
Frightened, helpless souls believing
the Statue of Liberty was welcoming them.

I raised my ax, ran through the front of the rapidly disintegrating building,
broke though the firewall and there, untouched, were boxes of men’s shoes.
“This is my lucky day,” I thought and grabbed an armful of boxes, most of ‘em size 12, hurried outside, dropped them on the sidewalk, back in for another armload.
The Jew saw me and flashed anger, shock, disbelief.
Nothing he could do but stand there.

Two weeks later I still had not worn the shoes.
Still in boxes, smelling of smoke.
Reminding me of a frightened and angry man.
Hurting but defiant. Undefeated.
These people.

He’s been gone thirty years now.
“Gone.” A nice way of saying “dead.”
At 76. Heart. At Jewish Hospital early on a Sunday morning in Spring.
I was there when he “passed” - love that expression.
“Passed.” Sounds like an old black gentleman entering the Promised Land,
wearing golden slippers, his face aglow with newfound glory.

The rest of the morning I wandered through Forest Park, visited the
zoo, searched for some meaning to all this
in furry and feathered eyes. And the big questions for myself.
“Where do I find the answers now?”
Where, Dad?
What do you remember about leaving the village in Russia?
What was the boat journey like? Who were you with?
Who met you here? How did you learn the language?
Who were your friends, your teachers, your enemies?
And the question that would intrude into that hidden and sensitive area:
Did we lose any family in the holocaust? A closed chapter, never read.

Thirty years and the questions still dart through my mind,
quick shadows, faint echoes, like swift birds at sunset that you
sense more than see.
Never asked.
Never answered. 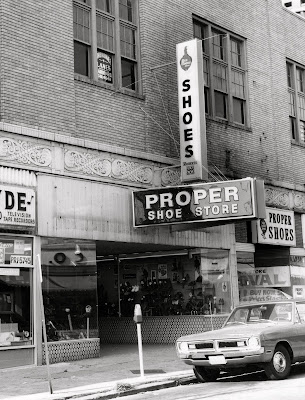