Mugged by a Gang of Coffee Cups

The other morning I realized my situation was out of control. As usual, I shuffled from my bedroom to the kitchen. Objective: Coffee. I didn’t even notice if the usual enclave of birds was feasting at my bird feeders, or if they needed seed. First things first.
So, into the coffee maker - filter, Community Coffee New Orleans Blend, and cold water. Push the “on” button and wait. This part was easy. Predictable. The next step proved more complicated, even stressful. I opened the cabinet door to grab a cup. 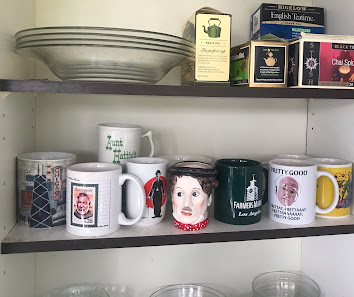 I stopped and stared helplessly at the shelf. At the cups. That’s when it hit me - I have a  whole lot of coffee cups. Thirteen of them at last count. Now, who needs thirteen cups? All I need is one. Maybe two or three, just to add some excitement to my mornings. But thirteen??
This is when I realized how insecure I am. I needed to pick the “right” cup. I narrowed it down, slowly, to the Los Angeles Farmer’s Market, Larry David “Pretty Good,” and Ernest Hemingway in Key West. I smelled the coffee brewing, needed to wake up, begin my day, escape from this dilemma. I decided on the Hemingway, a gift from my son from his trip to Florida six years ago. 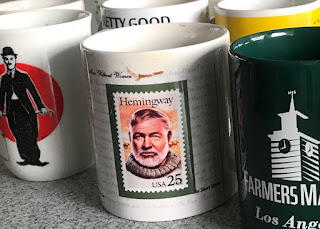 As I sat there over my coffee, staring out the window, I wondered how many other people are similarly obsessed. I’m sure I wasn’t the only one in this situation. I mentioned my cups predicament to a friend a couple of days later.
“Those aren’t cups,” she said. “They’re mugs.”
“Same thing,” I said, suddenly defensive.
A bit of advice here: Don’t argue with a knowledgeable woman about anything in the kitchen. Especially dishware. “Those are two different things,” she said. “Different sizes, different functions.”
I knew I was getting in deeper than I wanted to. She told me, in gentle terms, that a cup is used for tea and is smaller. Six ounces, to be exact. That’s why the British say “a cuppa.” A mug is used for coffee, also for hot chocolate. So when you say, “Let’s get a cup of coffee,” you’re showing your lack of awareness. Just to finish this lesson, understand that a mug is sturdier and comes without a saucer. A cup and saucer go together like ham and eggs, just to keep the breakfast analogy going.
About a year ago, I cleared out some of my cups. Maybe seven or eight of them. The shelf was too full. A couple even had dead flies in them. I still found it difficult to take a few to the Salvation Army, which is a kind of purgatory for cups.  “I Love You” was one, either from my wife, my daughter or my son. A morning reminder I was loved. Another was “Happy Father’s Day.” Every father in America must have one of those. At least I hope so. I also gave away a $20 cup I had bought at the Truman Library in Independence. It looked like it was made of marble and had the Presidential seal on it. The cup looked great on the shelf or the table, but drinking coffee from it made me feel imperious. As though I had to sign some bills, call the Speaker of the House, or ponder the wisdom of dropping the atomic bomb. Not a good way to start the day, right?
However, parting ways is not easy. Coffee cups, I believe, have something in common with our t-shirts, caps, and greeting cards. We are emotionally attached to them, for they represent part of our past: occasions, connections, celebrations, and expressions of love.
About the cups thing: I, for one, will continue to call them cups, regardless of proper nomenclature. Some things I can not part with. Tomorrow morning, when you make your coffee, think about which cup you reach for. And why. You may learn something about yourself.
#